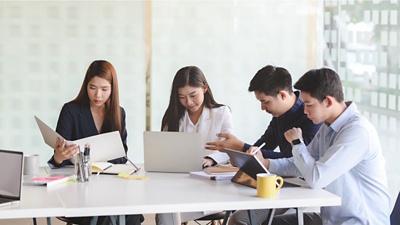 In Asia, Natixis Corporate and Investment Banking (CIB) has approximately 700 employees in the region.

“We have expanded very significantly in Asia in recent years with investments and developments, and we’re achieving head-count growth of about 10% every year,” says Magdalen Tsang, head of Human Resources for Asia Pacific, based in Hong Kong.

“Asia is one of the areas where we want to invest more, and we see the opportunities here. We also want to be more client-centric and provide better solutions for those clients,” says Tsang.

However, the bank’s expansion plans in Asia have been hampered by old and manual processing systems.

The long road to automation.

Ten years ago, the bank started expanding its Asia operations. “We were using an old system then. But with more people, it was just not feasible to continue managing our processes manually,” says Tsang.

The company then purchased a simple system to meet its needs. The new system didn’t specialise in HR processes and only served as an HR database, with a few extra functionalities, such as leave management. It automated some of the bank’s processes, but not many.

The semi-automated system allowed Natixis to input basic information, such as an employee’s emergency contacts, and employees could manage their leave themselves. But beyond that, paper forms were still being used.

As the bank grew and its requirements changed, Tsang recalls multiple customisations made to the new system. But this only created more problems than it solved.

The customisation was necessary to facilitate the company’s changing needs, such as to keep up with new rules and regulations regarding employee information and personal data. But these customisations made the system very fragile, and it often broke down.

“Sometimes the disruption was minor, but at other times it was serious. Because the system was based on a physical server, our IT team was constantly tasked to fix it and sort things out,” says Tsang.

Eventually, even Natixis’ IT team and the vendor who had provided the system could no longer resolve the problems that came with the breakdowns. No one knew how to deal with the issues.

“We couldn’t fix it—and we couldn’t change it,” says Tsang. “So it was critical that we found a new system.”

This was in 2013. In Natixis’ search for different solutions in the market, it came across Workday, which was becoming more well-known in the market. With Natixis New York just beginning a partnership with Workday, Natixis Asia Pacific started considering to negotiate a global contract with Workday.

Natixis saw many potential benefits with Workday. “There were many features for business processes that we could use,” says Tsang. “For example, Workday could help us build the organisation chart, which is normally a very complicated and administrative task. Further, we could incorporate different workflows on the organisation charts themselves, based on hierarchical approvals.”

A quick and easy deployment.

Deployment of both was quick. “We started our design workshop with Workday Human Capital Management in late February 2015, and we went live in July—very quick for a totally new HR system. Workday Learning was similar too,” she recalls.

Deployment of the applications was simultaneous across the 12 Natixis Asia Pacific offices. “The HR departments used it first to upload data, and then it was released to the rest of the employees,” Tsang says. “I delivered the training for both applications, and right from the start, everyone was very excited. Everyone was very impressed with what we could do with Workday compared with what we had in the past.

With the systems being so user-friendly, Natixis did not experience many problems after the deployment. Whatever queries they received were also solved almost immediately.

These dashboards help give managers an overview of the business. The time-off calendar for example, allows managers to glean a full picture of their employees’ schedules so they can manage deployment.

The system also automates multiple processes for the company. “It is so easy for us now with processes, such as obtaining a physical signature. With Workday, we can track this signature and know whose approval is still pending. It saves a lot of time and effort on manual follow-ups,” she says.

Budget approval and recruitment processes are also now simplified. “We are expanding, so hiring is an important process for us,” says Tsang.

Each manager of each business line is clear about how many positions they need to fill as well as the budget allocated for each position, with the budget approvals function within Workday. Once they find a suitable candidate, managers submit a hiring requisition through the system, which then reaches the country manager, senior management, and so on, offering the full process.

“The manager can then track this requisition through the system and know the stage of the approval, or just track how long it takes to get approvals,” Tsang says.

Getting acknowledgement on receipt of new policies, and issuing questionnaires and documents are also tasks that can be accomplished with Workday.

“With this new HR system, Workday really caters to our needs in a more innovative way,” Tsang says.

But it’s not only HR processes that have improved with Workday.

“We have a scheme where employees are entitled to either a corporate mobile phone or an allowance. In the past, this was managed manually by our IT department that would receive a request by email, and send it to the manager for approval. Records were kept manually with limited control,” Tsang says. “Now this is all done through Workday too.”

“Workday not only stores information, it is a comprehensive, one-stop system because you can do everything with it. Training is part of our learning and continuous development, and we wanted a single system that could handle that. That’s why we chose to incorporate Workday Learning into our system,” Tsang says.

The company has an e-learning system provided by the head office. But it does not provide any record tracking about enrollment, classroom training, registration or which courses employees have completed. Natixis used to manage all this with Excel spreadsheets and emails, and there was no other way to capture the records.

Workday makes Natixis feel like it is not just a customer, but a real partner. “They understand our needs and provide us with solutions whenever required. We had made requests for features that Workday did not have at the time, but they still helped us to resolve any challenge,” says Tsang.

A unique culture of Natixis is that its employees are required to take ‘block leave’ every year—consecutive days of leave. However, Workday did not have a feature that could record this. Nevertheless, Workday came up with suggestions, and while these may not have been exactly what Natixis was looking for at the time, these solutions still satisfied its needs.

“With Workday, we can also leverage Workday Community. There are many different forums in which you can share or learn more about other users’ experiences, and there are also helpful tips and recommendations. We feel that Workday considers these opinions and sees how they can enhance existing systems. They really listen to the voice of their customers,” she says.

Natixis is looking to continue its partnership with Workday. “We have slightly altered our own Workday system since deploying it,” says Tsang. “Because it is so user-friendly, our HR and IT teams have successfully added in some business processes of our own to run in Workday. Of course, we still need Workday’s support, but this is minimal. And there are still more processes that we are looking to automate.”

The very fact that this system is flexible and versatile is the major benefit for the company. “I think that for the long-term development of an HR system, it is important that you find one that is user-friendly and easy to upgrade,” says Tsang.

“Being on the cloud and not relying on a physical server is an ultimate plus for us. If there are any updates, this is automatically done upon login. You do not need to do anything. But most important, it allows the bank to think of HR processes as a whole. It’s not just recruitment. It’s not just the payroll. It’s not just about benefits. HR systems are a means to provide you with an end-to-end HR process, and Workday delivers.”