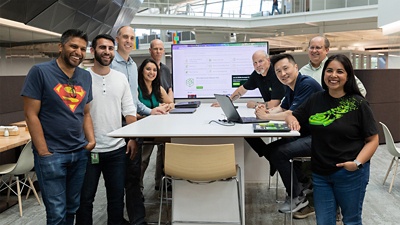 Single source of truth for data

Visibility for hiring managers into the hiring process

NVIDIA is a popular company to work for. From inventing the Graphics Processing Unit (GPU) in the late ’90s to powering the world’s fastest supercomputers to paving the way for autonomous vehicles, they’ve pioneered new platforms for artificial intelligence, deep learning, and data science that developers, researchers, startups, and enterprise companies depend on. A generation of people grew up playing video games powered by NVIDIA graphics, millions of developers contribute to their ecosystem, and thousands of hopefuls apply for jobs each day. With over 20,000 employees around the world, growth is central to their mission.

In the design partner group, I could suggest enhancing the mass operations feature to reassign tasks in bulk from one recruiter to another. This capability  saves us a tremendous amount of time every day.

Supercharged with a single data set.

To manage the sheer volume of their human capital management (HCM) operation, NVIDIA needs a solution that supports their market leadership and innovation, operational scale, and cross-functional agility. As a long-time subscriber to Workday HCM and Recruiting products, NVIDIA leverages the mass operations management framework and document generation capabilities to manage their people operation every day.

Foundational to NVIDIA’s use of Workday is the single data set as a source of truth. Because they don’t need to integrate multiple data sets, they have better control over the hire-to-retire lifecycle. Without a single data set for managing employee information, their exponential growth would be a complex, laborious challenge. Building on Workday as their system of record, NVIDIA has methodically deployed additional Workday products as they have been released.

Not only is NVIDIA an early adopter of the newest technologies from Workday, but they’ve joined design partner groups to recommend and pilot Workday product innovations. One new feature they suggested focuses on the mass reassignment of candidates between recruiters. NVIDIA receives approximately 2,500 applications daily and has close to 150,000 candidates in the review process at any given time.

To support the various business units that needed new talent, resources had to be flexed and reassigned constantly. The existing system couldn’t move candidates in bulk from one recruiter to another, which meant that many applications were languishing in individual inboxes waiting for review. The effort was painstakingly manual, requiring that each task be reassigned as a new task with a different owner. NVIDIA recommended this capability in the design partner group and Workday developed it.

With the mass operations management capability in Workday, NVIDIA can mass assign up to 50,000 candidates at a time. What used to take more than 24 hours to perform is now handled overnight, with NVIDIA reassigning 10,000 actions by morning each day. “Workday lets us give managers much more visibility into the process. We can let them know exactly what stage their candidates are at and what tasks they need to do to move forward,” says Brad Staresnick, HR technology architect at NVIDIA.

Not only do managers now have visibility, but they also have the flexibility of reviewing the candidate pool on their own. Depending on the hiring goal, role, or caseload, they still have the option of working directly with a recruiter who presents each manager with individual candidates.

Workday lets us give managers much more visibility into the process. We can let them know exactly what stage their candidates are at and what tasks they need to do to move forward.

Intelligent automation and a pool of top talent.

As they look toward the future, NVIDIA is planning to deploy Workday Skills Cloud, a universal skills ontology that cleanses, understands, and relates job skills data. This lets candidates build personal skills profiles that the company can leverage to fill gaps and identify strategic hires. “The ability for Workday Skills Cloud to review a candidate’s experience and education and suggest roles for them speeds up the recruiting process,” says Staresnick.

A curated set of skills offered to employees via Workday Skills Cloud now makes talent optimization a lot more manageable. Without it, the arduous task of coming up with individual skill descriptions might demotivate employees from updating their profiles. Existing employees can create their profiles, and managers can review that data and identify where to build up skills via recruiting or learning opportunities.

The ability for Workday Skills Cloud to review a candidate’s experience and education and suggest roles for them speeds up the recruiting process.

Because NVIDIA operates in over 50 countries with different rules and regulations, centrally managing individual offer letters and reviewing documents for accepting employment is a monumental task. They need a solution with conditional rules that can handle all the exceptions and requirements of each country. NVIDIA is looking forward to becoming an early adopter of Workday Docs, a new What You See Is What You Get (WYSIWYG) document generator offering within the productivity suite of Workday that will allow them to flexibly manage offer letters. “Our growth depends on the collected capabilities of our talent. Workday helps us find it, keep it, and develop it,” says Staresnick.

COMPANY
NVIDIA’s invention of the GPU in 1999 sparked the growth of the PC gaming market and has redefined modern computer graphics, HPC, and AI. They are reshaping trillion-dollar industries.
INDUSTRY
KEY PRODUCTS USED