Retailers know they must stay agile and flexible to thrive now and into the future. Our global study digs into the importance of organisational agility for retailers.

Agility always pays off in the retail world, even without the effects of a global crisis, and even more so in the middle of it. The retail landscape is likely to look very different for quite a while, and staying flexible is key for retailers as the world moves forward.

Our global survey of 998 executives, “Organisational Agility at Scale: The Key to Driving Digital Growth”, shows that the majority recognise that organisational agility is key if they want to drive long-term digital growth. And, perhaps more tellingly, we found there’s a strong relationship between digital revenue growth and organisational agility.

Here are the five behaviours that are necessary for organisational agility: 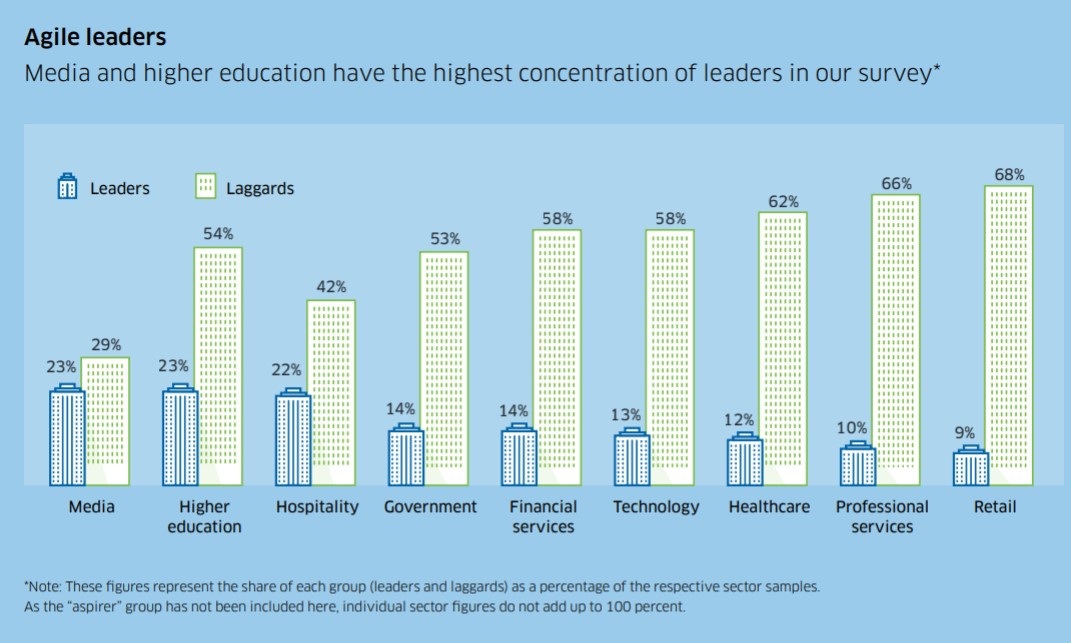 Here are a few key insights from survey respondents from retail companies:

The challenges to organisational agility

Though many retailers are making strides toward organisational agility, they’re up against a few common challenges. When asked about moving to real-time, integrated planning, they responded that their most common obstacles are bureaucratic organisational cultures, lack of insightful data and market intelligence, and a lack of relevant employee skills.

Retailers are also working to stay ahead of changing business needs by updating processes, but report struggling with bureaucracy, inflexible legacy technologies, and a lack of motivation to move away from legacy processes.

The keys to increasing agility

Retail had the lowest percentage of Leaders of any industry in our survey, so even though the sector is changing, retailers have more work to do than most to accomplish organisational agility. But if they focus on a few key areas, they can make progress toward the ability to adapt quickly to the changing world of retail.

The ability to re-allocate employees when a need arises or when their skills are needed elsewhere is paramount, but only 58% of retailers said they can do it quickly. That lack of agility can hold the whole company back, so a focus on flexibility in that area is key.

Another area of focus revolves around this statistic: a mere 29% said their employees have full access to the data they need. When data is cordoned off from the people who need it, it’s tough to be agile.

So, to build their organisational agility muscles, retail leaders should focus on evolving their digital growth strategy, giving employees access to the data they need and being ready to re-allocate employees to where they’re needed.